The last few months have been pretty amazing, first LA and amazing people then a few weeks later I found myself once again sitting in Terminal 3 of Manchester airport waiting to climb back on to flight 55 to Chicago. This time I wasn't going anywhere else but getting off and staying for 2 whole weeks. For those of who read last weeks blog and didn't vomit yourself to death I was there to see my girlfriend, Rachel. Chicago is an amazing city and over the 2 weeks I crammed so much into it it's hard to remember all the things but lets give it a go hey? I'm going to give you all I can not to make you vomit more, though I promise nothing.... TO THE BULLET POINTS! 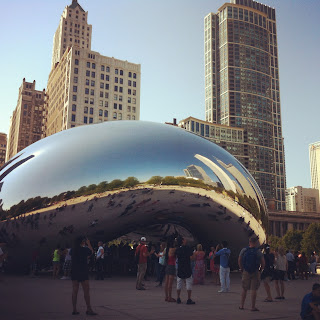 Rachel's birthday was honestly the main reason I choice to go to Chicago at this time of the year, I mean that was clear right? Birthdays are amazing, Rachel is someone I massively care about and it seemed like the thing to do, so I did. I had told her we could do whatever she wanted, it might have been my holiday but it was her day of birth and because a big sappy boy I'm nice like that offered to take her out for the day. She had picked a River architecture tour. So at 6ish we got on a massive boat with about 7 other people (busy I know right) and moved slowly up and down the river, while the sun went from being up to gone. It was amazing sitting next to her for that in a city she clearly loves watching how pretty it is at all times of the day. It's easy to see why she loves it, the building are amazing, the skyline at all times of the day amazing and the people, well they are some of the friendliest nicest people I've met, though that might be just because of my charming accent. 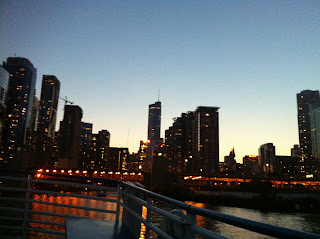 After that I took her for a meal at the Grand Lux Cafe, I safe "cafe" but I don't think America knows what a cafe really is... this place was huge and clearly a fancy restaurant. The food amazing, the staff amazing and OH GOD THE MOLTEN CHOCOLATE CAKE *dies in own droll* each one is made from scratch to order and is so so good, worth going just for that.. oh wait I'm dead now I can't type.. braaaaaiiinnnsss...

On my last day, Rachel planned some things (I'm back from being dead now, don't worry) for us to do. So once again found ourselves heading out into the streets of Chicago, this time however we managed to be out early enough for Lunch, so naturally we went to a Scottish whiskey bar, here we had burgers named after famous Scottish people AND drank whisky, something the guy who worked there said he had never done before at lunch time. "Come on man, you're a WHISKY BAR.. give me some damn Whiskey with my lunch!" is something I didn't say but got whiskey anyway and damn it was good.
After a bit of a walk around the Lincoln Park area (I'd happily live there) we finished the evening off with a trip up the John Hancock centre for a final and amazing goodbye to the city, fighting to get a seat by the window before the sun started going down (we did). we sat, laughed, flirted, drank and flirted some more while watching the sun dip behind the world and my time in Chicago. It was an amazing trip with some fantastic people and one rather awesome person (I vomited a bit myself there sorry readers). It's not even a "will I ever see this city again" moment because the place has many things I want to see again and I will. See you around Chicago, you're a pretty fantastic city. 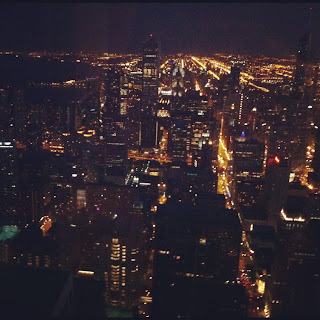