OK, lets not pretend here that I am a famous person or anyone with a life that has stories so amazing they could one day be turned into a movie (I mean if you want to feel free...). But I have had a life, it could have been better, it could have been worse but damnit it's been my life and I have enjoyed every second. Right, well maybe not EVERY second but those crappy seconds better you as a person and shape the man or women you become later in life. Jeez look at this half a paragraph in and I'm already way off my point.

My point is that I have had a life and this life has been captured in many photos over my 26 years of life. These photos are a reminder of people, times, feelings and moments. They tell stories and remind me of things long forgotten. Id like to add the sentence "they make me laugh and cry" here somewhere but I don't remember the last time a picture made me cry, sure I have feelings of sadness if I see a picture of someone I know who has gone, but mostly it just reminds me of happy moments with them and that's what this blog is going to be about. This blog isn't just for you, it's for me to look back on my life and see my life as it's become what it is now. This blog will not be in any order because, frankly, that would make this a lot harder on me and I can be a little lazy sometimes so expect to bounce all over my life from time to time. Oh one final thing, I guess I should mention this is going to happen every now and again, think of it like a project...


Having said all that, lets start someone near the beginning of my life, lets start when I was about three (I'm sure if my sister reads this she'll correct me) which would have been about 1989. For those of you not born before the 90's this was a time of brown, colour had just been added to the world to make photographs more interesting and we started with rubbish colours just to get people used to it. OK that bit wasn't true but I can tell you it was a time before The Fresh Prince of Bel-Air, Seinfeld or Twin Peaks had ever come on the TV I know that for a fact. The picture shows three people created by my mum and dad, My brother: Chris, my sister: Joann and that little grinning cute, still kind of blonde hair thing is me, Ian.

I think around this time in my life I had just started managing to say their names correctly or at least getting closer to them. For the first few years of my life I had managed sounds close to this and from what I'm told seemed happy to just go with it. Chris became "Kig-a-da" and Joann was "Waan" That's with a elongated "An" sound. I was about three and it was close enough, besides the only time I would need to say their names is if we where fighting. Which I am informed we did rather a lot, but look at the (demonic) cute smiling face at the front, it couldn't have been my fault, way too precious. Though please don't quote me on that and I will fact check with my mother for the future, I promise.

This was taken in the house I still live in today with my mum and dad, the walls and floor have thankfully changed from the "decorated in the 70's" style we have going in the picture but my brother and sister have left leaving just me. It's safe to say we get on better without living together and thankfully I have mastered their names by now. 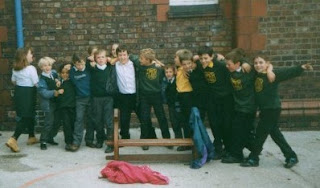 I've not jumped to far forward into the future with this picture, I'm about ten here and getting a little wider than some of my friends and for some reason am the only one out of the group who isn't wearing a green jumper. Looking at this picture kind of bothers me that I'm NOT wearing green, why not? Did I not have one? was I being a rebel and refusing (unlikely) or had I just taken it off? I remember it being a strict rule they had to be on but clearly "fuck da rules, I'm 10, it's 1996, I've seen a episode or two of Farther Ted so know the word "Feck" so take your green jumper and get out of here"... I assume I never said to anyone, ever, at any point of my school life. Looking back I just kind of wish I'd have wore the stupid green jumper.

Looking at the picture now, from the group of lads I can remember the names of about 8 of them pictured, two of them are still very good friends to the time of writing this, others I still see around or if they're lucky have things "liked" on Facebook and two where utter knob heads, I mean utter utter total tools. Who I'm rather pleased to say I have zero interaction with. One could be in prison for all I know, I mean it's likely as the last time I seen him he had stolen a car. Like I said, knob. Hello if you're reading this by the way. The School is Linacre Primary in Bootle, this is I'm guessing lunch time, as can be seen by the lack of eating going on and for the life of me if you held a gun to my head I wouldn't be able to tell you why I have this photo, who took it or for what reason it sits on my computer. It's nice to see that I always tried to surround myself with people, I like people... people are cool.


I have three boxes full of old photos which is three boxes of stories waiting to be told and many more photos from more recent times (not in boxes, more things need to be put in boxes) which I'm hoping to interest you in over the time I do these. So expect more of these, I like this blog idea.